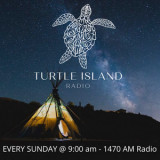 This year we celebrate National Indigenous Peoples Day on Monday, June 21st and in honour of that day we would like to introduce you to Fairchild Radio’s newest host, Shane Wilson, also known as Medicine Fox.

He is a production artist, musician and the host of Turtle Island Radio heard every Sunday morning at 9am on AM1470, a program that celebrates Indigenous music and culture across North America.

An Interview with Shane Wilson

Turtle Island is a term that a lot of tribes have used to describe North America, the continent. And I thought it had a nice ring to it for a radio show.

You describe the music you play as drawing inspiration from the ancient shamanic rhythms of Earth's tribal cultures. How did you become interested in this kind of music?

I grew up in a lot of ways surrounded by indigenous music. My father was a music producer himself and was working with a lot of artists, so they were always around the house and I would hang out at the studio so that was really where I got steeped in that musical culture. And later growing up as a musician myself and a performing artist, building into more electronica music and playing at a lot of festivals, deejaying and performing my own music.

And now more recently I’ve had the opportunity with this show to look back at this huge collection of music and artists that I’ve been enjoying all these years and now I’ll be able to come in and share that music with people who may be hearing it for the first time or they may be getting exposed to artists they haven’t heard before. I always try to create a real dynamic mix of newer artists and a lot of traditional music as well for people.

Your bio says that you were born here in Coast Salish Territory, and that you have ancestors of mixed European and Native American, specifically Chickasaw descent. Do you know much about your Native American heritage?

On my father’s side of the family there is Choctaw and Chickasaw ancestry there. The Choctaw and Chickasaw tribes were originally living in the Mississippi River Valley. In the 1800’s there was a process of relocation to what became called Oklahoma, but was called “Indian Country” at the time.

This month we are celebrating National Indigenous Peoples Day on June 21st. Do you think having this holiday draws more attention to Indigenous culture and Indigenous music?

I certainly hope so. It doesn’t
have to be just one day. It’s a great reminder, but at the same time, let’s not forget the rest of the year. Music is such a great way to learn about a culture. That’s why I keep most of my show just to playing music because I feel like when people hear the songs and hear the different languages, we can start to learn that way.  That’s a real universal language that we can connect with.

From your personal experience, do you think that it’s difficult for Indigenous people and particularly artists to get support or recognition for their work?

I think it’s changing a lot. I think that the music industry, in my experience, is a very difficult place for artists in general. And then when you look at indigenous music, it’s especially that way because these songs were never thought of as a commercial product, that’s not the way we think about it. We think of these songs as being part of a culture and part of the heritage and the legacy for future generations. And it’s a living, breathing part of the culture, so how that interfaces with the music industry is difficult sometimes.

But we are seeing a lot of really great artists coming up now, young artists, and they are listening to the traditional music as well and bringing those worlds together with different kinds of remix projects. I’m really encouraged. I think that there is a real renaissance right now of indigenous music going on. A lot of it is going on in the underground scene, but a lot of it is bursting through now in the world of hip-hop, electronic music and remix projects as well so lots to look out for and stay tuned!

Check out Mixcloud for the complete interview.

You can also check out DJ Medicine Fox’s music on his SoundCloud Page.

Here is an example of the kind of music you may hear on Turtle Island Radio.