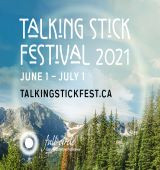 (many events free of charge)

For the 20th Anniversary of the Talking Stick Festival in 2021, Full Circle: First Nations Performance calls to the Four Directions and All Our Relations to gather around Four Fires in each season: winter, spring, summer, and fall. The anniversary celebration began earlier this year with The Winter Lodge: Sitting with our Ancestors – performances and teachings presented online from February 18-27, 2021. Spring Awakening followed, offering A Plant Walk, concert, cabaret and Industry Series workshops and sessions, from April 29 – May 1.

NOW ONLINE FROM June 1 – July 1, Talking Stick invites you to into the bright light of SUMMER SOJOURN. In store is a bountiful celebration of Indigenous performance, art and culture online. Full details are rolling out for a month-long schedule of concerts, dance performances, exhibitions, readings, theatrical presentations, powerful storytelling, discussions, film and eclectic co-presentations - as well as some unique and unexpected experiences.

Summer Sojourn includes original programming as well as co-presentations and collaborations with a wide range of preeminent Indigenous organizations, festivals and events across the country.

On right now until June 7, choose from 35 works by Indigenous creators and filmmakers at the Dreamspeakers International Indigenous Film Festival (ticketed).

The following events are featured elements of the Summer Sojourn festival:

In 2019, the federal commission on Missing and Murdered Indigenous Women and Girls released their final report, Reclaiming Power and Place. In 2020, over a dozen artists from a wide range of disciplines were commissioned by New Harlem Productions to read and respond to specific chapters of the report. This digital iteration of Embodying Power and Place offers twelve audio-visual works that seek to honour the missing and murdered Indigenous women, girls, Trans, and Two-Spirit people, and strives to create a sacred space in which to reflect, heal, and find renewed hope.

(This digital experience is co-presented with The Cultch)

Tara Williamson with her band, The Good Liars

Over the last few years, Tara Williamson has established herself as a sophisticated lyricist and soulful voice in the Indigenous and Canadian music scene. Tara is a Victoria-based musician who has been described as a poet and provocateur - the spark that ignites the flame. A First Nations singer/songwriter originally from Manitoba, her music is an unwavering document of self: the truth that hurts before it heals. Christine Fellows says, “Tara Williamson’s songs are unflinching and direct, hopeful and generous, suffused with snowy light.” Join Tara and her band for a special concert experience.

Also on June 18: Talking Truths: Following in Her Footsteps involves a discussion among 4 Indigenous artists who have forged a path for other Indigenous women artists in the performing arts.

Info will be rolling out in June on the Talking Stick website www.talkingstickfest.ca.