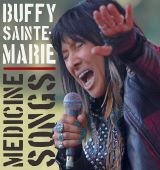 June 21 is National Indigenous Peoples Day. This is the official day of celebration to recognize and honor the heritage, culture and valuable contributions to society by First Nations, Inuit and Métis peoples.

Let’s take this opportunity to learn more about the music of the Indigenous Peoples of Canada.

The Indigenous Music Awards (IMA) recognizes the artistic excellence in the songwriting of First Nations, Metis, and Inuit people from around the globe.

When we think of Indigenous Music, most people usually think of their traditional music. However, did you know that many popular songs that were written in English, were actually written by Indigenous artists? For example, Buffy Sainte-Marie was the first Indigenous Canadian-American singer-songwriter to win an Oscar.  Her song "Up Where We Belong", co-written for the film An Officer and a Gentleman in 1983, won both the Academy Award for Best Original Song at the 55th Academy Awards and the Golden Globe for Best Original Song.

Here's a beautiful rendition of the song Up Where We Belong sung by Buffy St. Marie herself.

Here are some of the other awards accredited to this brilliant artist and devout activist.

Cary Morin is described as “one of the best acoustic pickers on the scene today.” Cary has won numerous awards for his work which include:

The winner of the 2019 Juno Award for Indigenous Music Album of the Year 2019 was Jeremy Dutcher for his album Wolastoqiyak Lintuwakonawa.

Here is his performance at the 2019 Junos.