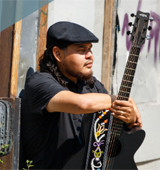 On March 5, catch "one of Winnipeg's great modern bards" (Stir) at the Chan. The evening promises to be a lyrical journey marked by love, loss, and resilience. Leonard specializes in writing lyrics that cut to the heart of the matter. His latest album Thunderbird tells his story as an Anishinaabek son grieving the loss of his mother while celebrating the birth of his daughter.

The genre-bending, multilingual artist moves between Inuktitut, English, and French as she explores folk music, textural indie rock, poetics, and the breadth and depth of contemporary Indigenous culture. Hailed as “a powerful record, and a rare album where both the music and narrative are equally stunning” by Exclaim!, her latest full-length The Ballad of The Runaway Girl was shortlisted for the prestigious Polaris Prize in 2019. The complex musical tale of an expatriate Inuk, Rolling Stone France called it a “delicately violent album that seduces as much as it questions.” In these graceful and urgent anthems of an Inuit ancestry that refuses erasure, Elisapie confronts the violence of colonialism while harnessing the deep strength that comes from Indigenous interconnectedness to the land, animals, and people.

Please note, there will be a pre-concert talk at 7:15PM in the Royal Bank of Canada Cinema with Marion Newman, guest curator of the Chan Centre and celebrated mezzo-soprano of Kwagiulth and Sto?:lo? First Nations, English, Irish and Scottish heritage.

Journey between visible and invisible worlds as animal and ancestral spirits come to life in this musical feast. Northern lights spill out from a crack in skyworld as Coyote brings messages from beyond. mosôm mâskwa, Grandfather Bear, prepares for hibernation and activates his special powers to call on a small child to join him. nohkôm ôhow, Grandmother owl, hunts and heals the darkness that lives deep inside her grandchild. At once mythical and magical, Feast of the Invisible / wîhkohkêwin, is a multi-dimensional musical experience you will never forget.

Please note, there will be a pre-concert talk at 7:15PM in the Royal Bank of Canada Cinema with Margo Kane, a Cree-Saulteaux performing artist and writer known for her solo-voice or monodrama works Moonlodge and Confessions of an Indian Cowboy, as well as her work with Full Circle First Nations Performance .