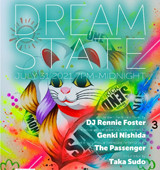 An evening of visual arts and ambient electronic music

Enter the Dream State, a setting temporarily separated from other realities through sound and vision, at the  Using projected light, the environment stimulates the eye and the movements of others affect your experience in the shared space. The music is unique, as if it is either from the distant future or distorted echoes of past dreams.

Dream State will be held in the spacious Nikkei Centre Events Hall, offering a place for guests to enjoy a comfortable seat, relax with a beverage from the bar, catch up with friends, and ponder among others lost and found in the Dream State. Tokyo street artist, Taka Sudo will showcase artwork for sale in our elegant lobby entrance to enjoy before entering the immersive environment created by Genki Nishida, also hailing from Tokyo. Ambient electronica played by Rennie Foster will fill the room throughout the evening, connecting guests to one another with music. At 9PM, a special LIVE analog modular synthesizer performance by The Passenger is sure to evoke intrigue and introspection.

Get your ticket in advance: centre.nikkeiplace.org/events/dream-state/

Before returning to Canada in 2011, Rennie was one of Japan’s top rated club DJs with residencies in Tokyo, Kyoto, and Shizuoka, as well as playing extensively in venues across Japan. Rennie has DJed in nearly all of Tokyo’s celebrated club venues as well as in performances in New York, Paris, and across Canada. Rennie is a current resident at Vancouver’s leading after-hours club and runs his own signature RF record label.

Known for providing otherworldly and artistic projected visuals created with original content, Genki has performed at festivals and events of all kinds. From extensive experience in Tokyo super clubs, to visually backing up the best electronic music artists in the world at venues in New York, London, Sydney, Vancouver and worldwide, he brings entertainment like no other. At Dream State, he will be creating the visual environment with moving images, light, and multiple artistic projections.

Jesse Creed, also known as The Passenger, is an electronic music artist specializing in using rare and vintage equipment to create melancholic electronica. Jesse has released many titles from cryptic cassette tapes of deep drones, ambient masterpieces on vinyl, to current and modern club tracks. He will perform his original ambient works using one of a kind modular synthesizer system at approximately 9:00 pm.

Born and raised in Tokyo, now living in Canada, Taka has advanced his unique and edgy works into several international exhibitions. As a participant in Vancouver’s celebrated Mural Festival, his bright and layered designs caught the eyes of many onlookers. Taka has shown his work in L.A., New York, Toronto, Montreal, and elsewhere. Taka will be in attendance to sign limited edition posters of this event.

The Nikkei National Museum & Cultural Centre's mission is to honour, preserve, and share Japanese culture and Japanese Canadian history and heritage for a better Canada. Since September 22, 2000, the multi-use cultural space, featuring a Japanese garden located in Burnaby, BC, has offered unique programming, exhibits and events, as a community place open to all. Within the museum repository we care for objects, photographs, textual records, oral history recordings, and film reels of Japanese Canadian historical and cultural significance. With the addition of family stories and historical records every year, we ensure the legacies of Canadians of Japanese ancestry live on into the future.