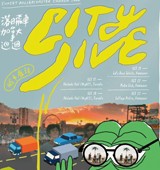 Sunset Rollercoaster is a Taiwanese indie band. The band’s debut album “Bossa Nova” was self-released September 22, 2011 and quickly received critical acclaim. After the releasing tour in Taiwan and Japan(including Summer Sonic in 2011), the band went on long hiatus. 2015, the band reunited and went back on tour, and released new EP “Jinji Kikko” March 1, 2016.Sunset Rollercoaster’s music style is multi-genres, combined with soul, garage, psychedelic-rock,and synth-pop; therefore, the band is considered as an icon of city-pop in Taiwan. Most of the songs are talking about nostalgic city life, the fantasy of love, psychedelic experiences in a absurd lyrical way.Music, Fan Page and Live Link:https://sunset-rollercoaster.bandcamp.com/https://www.facebook.com/sunsetrollercoaster/https://www.youtube.com/watch?v=bVb8x7QRUsYhttps://www.youtube.com/watch?v=Nq_2gXpszLI

Ezra Kwizera http://www.ezrakwizera.ca/INTERNATIONAL MUSICIAN, EZRA KWIZERAEzra Kwizera is an international artist, music producer and community leader. Ezra’s music style is richly multi?cultural – a zesty yet soulful mix of Reggae, Soca, East African Bongo, and Pop. With linguistic agility, Ezra fluidly sings and raps in English, Kinyarwanda, Luganda, Zulu and Swahili. Growing up as a refugee in Uganda before moving back to his home country Rwanda after the 1994 genocide, Ezra has a powerful motivation to support Rwandans through his music to rebuild their country. His music conveys the spark of an overcomer and the passion of a community leader with a vision to inspire change in his generation. He currently lives in BC, Canada.

Colour Domes bio Colour Domes is a two-pieced synth-based, live electronic project composed of Lars Berry and Fang Lee. Colour Domes meshes found sounds, beats, vocals and live synthesizer patterns to create songs that are at once darkly immersive. Their songs celebrate a kind of bleak vitality, paying homage to certain benchmark sound stylings that immerged from early 80s electronic music. Backward glancing and future facing, they combine affordable, currently available digital technology with an unabashed fascination for the “fabricated nostalgia” that can come from just the right turn of phrase combined with just the right forlorn, minimal SIN wave oscillation. Colour Domes concertedly adheres to the philosophy that it is far more agreeable to revel in the experimental nature of creating electronic music than it is to create “works of beauty”. Caustic noise added to an overly pretty track is often just the right element. Colour Domes’ stage includes only hardware, conspicuously avoiding the use of a computer.For Berry, Colour Domes’ formation came almost directly out of the dissolution of former project, Dronetonics, perhaps in the way fungus grows from the detritus of a decomposing log. Dronetonics was also a collaborative effort – also a duo – and active for four years. After forming in 2011, Dronetonics was signed by Taipei DIY label, 22 Records, who assisted in their first release – an EP in late, 2013 and a full length, entitled Sentiments, in September, 2014. Dronetonics was invited to play at Pop Montreal also in September 2014, and the toured Taiwan and Korea extensively in early 2015. Dronetonics played their last show in December, 2015.Colour Domes remained a solo project for Berry from January to July, 2016, playing several shows and festivals, including opening for Toronto duo, Phèdre, and Malaysian duo, [.gif], for their respective Taipei shows. In July, 2016, Berry was joined by Lee, who now sings harmonies, backing vocals and plays bass synth in Colour Domes. Lee, a Taipei local with her own extensive background in music composition and performance, currently works as a solo artist under the handle Sexy Boy Chris. Lee also works in the production of soundtracks for theater and experimental film, as well as in the production of commercial ads for TV. Additionally, Lee was the principal song-writer and lead vocalist for the Taipei indie band Liquid Punch (????), active from 2008 to 2012.