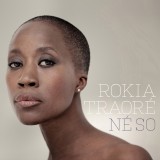 Co-presented by Cap Global Roots Series and the Kay Meek Centre“Traore’s a singer-songwriter in the modern sense who embraces but also stretches centuries-old traditions.” ~Chicago TribuneAward-winning Malian singer/songwriter Rokia Traoré defies convention and has been blazing new trails in world music for almost twenty years. Her father was a diplomat and much of Traoré’s childhood was spent traveling. Perhaps her multi-country upbringing paved the way for the musical style which she created, blending blues, rock, jazz, folk and traditional Malian sounds forging a new genre that is soulful and nostalgic yet modern and fresh.

On her 2016 release Né So, Traoré turns to friends John Parish (PJ Harvey, Eels), John Paul Jones (Led Zeppelin), and Devendra Banhart to help her express her deep sadness at the state of turmoil in her native Mali. She is also a voice for her country and this year was appointed by the UN as a Regional Goodwill Ambassador to spread awareness and generate support for West and Central Africa. Don’t miss this very special night with one of Mali’s most adventurous and captivating musicians.For tickets and more info check out http://www.capilanou.ca/blueshorefinancialcentre/16-Rokia-Traore/