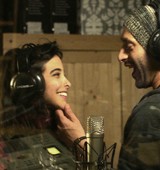 Udi Aloni’s film has a strong, charismatic character at its centre: Kareem, played by Tamer Nafar, the movie’s co-writer and a real-life rapper. This Palestinian youth lives in Lod, a rundown town outside of Tel Aviv. At the film’s beginning he’s drifting through life, moving between temp jobs and consorting with ne’er-do-wells, but some harsh events spur him to take his life—and his art—more seriously. This fledgling rapper and his girlfriend Manar (Samar Qupty) use hip-hop as a means of self-assertion and protest, just the way it’s been used in the black struggle against American oppression.

Junction 48 is strident in its politics, detailed in its portrayal of injustice and imposing in its expression of anger. Director Aloni uses his art as an activist cudgel: from the forced demolition of homes to racist Israeli musicians and more, he sketches a portrait of his enemies that is clear and unambiguous. You don’t have to align with the film’s politics to appreciate it though: for hip-hop lovers it’s a treat, and for fans of good drama it will be deeply satisfying.

EMAIL US HERE WITH "JUNCTION 48" IN THE SUBJECT LINE AND YOU COULD WIN TICKETS TO THE VIFF SCREENING: