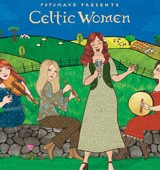 Putumayo is pleased to present Celtic Women, a collection of exceptional contemporary songs by renowned female singers inspired by Irish and Scottish traditions. Music has always been essential to daily life in Celtic cultures, and women have long been at the forefront of keeping these traditions alive.

Scotland’s Emily Smith begins the album with “Take You Home,” an upbeat original song inspired by and written during Smith’s own travels and tours. That’s followed by Karen Matheson’s “Ca Na Dh’fhag Thu M’fhichead Gini,” which is based on an old waulking song that women traditionally sang as they rhythmically beat wool to soften it. Next we head to Ireland with Cara Dillon’s haunting vocal and hypnotic flute-playing on “Hill of Thieves.”

One of Scotland’s most popular and influential bands, Capercaillie, offers a reinterpretation of a traditional Gaelic folk tune from the Hebrides Islands. We then return to Ireland for another well-known traditional song, “Spanish Lady,” performed by renowned sister duo, Maighread and Tríona Ní Dhomhnaill.

Putumayo includes a few of Celtic music’s unique singing styles on this collection, such as sean-nós and puirt à beul. The next song, “Dó Ó Deighdil Lom” by Irish vocalist Lasairfhíona, beautifully demonstrates the old style of singing, the ups and downs of the melody reflecting the highs and lows of love. Traveling across the pond to North America, we are shown the far reach of the Celtic world’s influence with Cathie Ryan’s rendition of Scotland’s Dougie MacLean song, “Garden Valley.” Éilís Kennedy follows Ryan’s sorrowful air with “Caili?n Mo Ru?nsa,” a love song accompanied by elegant strings and harp.

The Celtic Women collection ends with two Americans who have continued the timeless Celtic tradition while blending it with elements of Americana. “Fhear a Bhata” by Rebecca Pidgeon and Rose Laughlin’s “Wild Mountain Thyme” are reinvigorated old Scottish folk songs with new perspectives and beautiful female voices.

For more info or to get your copy check out putumayo.com.